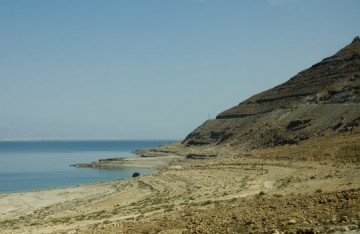 Our Hope: A Voice In The Wilderness

“There was a man sent from God, whose name was John.  This man came for a witness, to bear witness of the Light, that all through him might believe.” John 1:6-7 (NKJV)

John the Baptist preached in the wilderness.  The wilderness in this case was anywhere that Jesus was not yet known.  He began preaching and crying out for people to come to God before Jesus’ own teaching ministry had begun.  Because of this, many mistakenly thought he was the Christ.  Others thought he was the Prophet, or Elijah.  He wasted no time in setting them straight.  John was sent to prepare the world for the arrival of the Messiah among the people of Israel.

“He was not that Light, but was sent to bear witness of that Light.  That was the true Light which gives light to every man coming into the world.”  John 1:8-9

The Pharisees heard of this wild man preaching about the Christ.  They sent men out to find him, and to ask him why he was baptizing if he was not Christ, Elijah, or the Prophet.  When he answered, the words he spoke confirmed his devotion to the cause he was living. He said, there was One whose sandal strap he was not worthy to loosen.  He admitted he baptized with water, but that there was One who they did not yet know, and this One was of higher stature than he was.

“He said, ‘I am the voice of one crying in the wilderness; make straight the way of the LORD,’  as the prophet Isaiah said.”  John 1:23

The day after John spoke with the Pharisee’s men, he was standing in a river in Bethabara, baptizing.  He looked up and he saw Jesus coming towards him.  He immediately recognized Him, saying that here was the One he had spoken of, the one who was preferred before him,  the One he was preaching and teaching about.  John reminded them that he baptized using water, but that the Lamb of God baptized with the Holy Spirit.

“The next day John saw Jesus coming toward him, and said, Behold!  The Lamb of God who takes away the sin of the world!  This is He of whom I said, ‘After me comes a Man who is preferred before me, for He was before me.’  I did not know Him; but that He should be revealed to Israel, therefore I came baptizing with water.”
John 1:29-31

John’s voice prepared the way for Jesus’ earthly preaching and teaching ministry.  He introduced Him to people who knew nothing of Him, who were lost and needed a savior.  He spent his life being the witness that God called him to be, living only to be the voice that announced the arrival of the Son of God.  What an honor for him, and what a devotion to his Lord, that because of his faithfulness to the cause of Christ, he would not be quiet. He would not cease, he would not put down his purpose.  He stood in defiance of all who came against him, which ultimately cost him his life.  Yet with the loss of his earthly life, John gained eternal life.

You see, Jesus was his Hope.  Just as Jesus is Our Hope; John needed Him too.  All men do, whether they live in an earthly or a spiritual wilderness, for only Jesus can bring light to the darkness.

Are you a voice in the wilderness?  Do you share the Light with those who live in darkness.  How do others perceive you and your message?  And what is it that compels you to continue on, even when you are asked to cease?

Lili lives in central North Carolina. She writes devotionals and Christian articles and has been published in e-magazines, newsletters, and articles. She is a member of Faithwriters.com. She and her husband Chuck love to travel, and are animal lovers as well. They are active in their local church. Lili credits God for any inspiration that allows her to write. It's all about Him!
@@ohiolili
Previous Did You Walk Away From God?
Next What is Child-Like Faith?