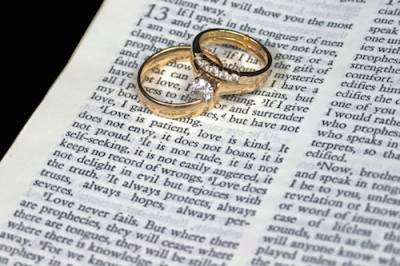 Many people, even in the secular world, know the Scripture from I Corinthians 13, in which it speaks of love, or charity. However, many people miss the point and get it confused with desire and lust. Believe it or not, sex has little to do with love, it does not say in Scripture “ … and the one ye shall love is the one you want to lay with … ”. People have this tendency to equate love with sex, but love for your spouse should root itself in your heart and soul long before you even consider sex.

What were your thoughts when you met your spouse for the very first time? Did you want to get to know them better, or was it that they were “hot”? This may be the initial draw when meeting someone of the opposite sex; you will be attracted to them in some way, but then you need to give the relationship time to strengthen and grow into love.

Making love to your spouse is the ultimate show of affection; you will never be closer to another human being, why degrade it by allowing yourself to succumb to its draw with just anyone?

To share that kind of love and passion with anyone other than your spouse takes value away from its purpose. It’s the point at which two literally become one. If you pressure your intended spouse into having sex to prove that they truly love you, then where is the kindness in that? When you each consent to the act, where is the long-suffering? If you can’t wait to have sex until after marriage, then it really wasn’t love at all. If you are willing to offer yourself to this other human being, joining together in unity under Christ for as long as you both shall live, then love should not be a passing thing.

A woman goes through a lot of pain and suffering to have a child, the least a man can do is respect her and realize that she is going through this intense pain for both of you. She loves you enough to sacrifice her own body to give you a child. If it’s just a passing thing for you as the male counterpart, think about what this woman is about to go through. Reverse the roles, how would you feel if you went through those nine months; growing a child within you, and then delivering that child into the world only to discover that the father of the child was only in it for the sex? Or the other way around, a woman willing to go through nine months of pain and suffering, only to turn that father away once the child is born. Having a child is the ultimate show of love and affection between two individuals, it deeply ensconces two individuals into the lives of their children, devoting the rest of their lives to helping those children as they become productive adults.

What possesses someone to abandon such an endeavor, how can you kill that kind of love?

Love will never vanish away. Love is much deeper than physical attraction. It’s the glue that binds you and your spouse; your soulmate, into one. Through that blessed union, God has given you a gift–one person in all the world who you can truly count on.

How do you view your spouse? What can you do to strengthen the bonds that hold your relationship together?

Tim is a self-published author. His genre is Christian Fantasy- he loves the challenge of trying to combine Christian and Fantasy into a novel that loses none of it's spiritual value. Tim has been an active member in every Church he has attended. He has served as Head Usher, a Sunday School Teacher, and a Youth Director, and has also served as a Church Elder. Tim's prayer is that the Holy Spirit will minister through his words, and that his experiences and knowledge will be helpful to someone out there who needs a true friend like what we have in Christ Jesus.
Previous Pulling People Up When They Are Down
Next Believing In Yourself Makes All The Difference In Your Outcome