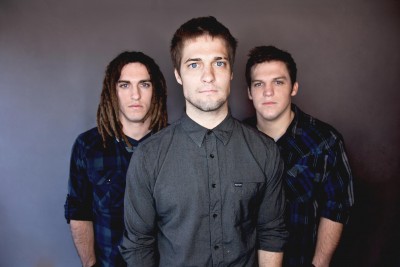 “About A Mile” Makes a Splash in Christian Music

Jesus carried His cross about a mile . . . how far will you carry yours?

This is the description you’ll find on About A Mile’s Twitter account. It doesn’t say “Christian band.” It doesn’t even identify who they are, exactly. Instead, that very small piece of real estate on their Twitter profile is used to pose a challenge, which essentially sums up exactly why they play music: to help strengthen your faith, encourage your walk, and renew your purpose.

About A Mile is a band comprised of three lifelong friends: brothers Adam (guitar and lead vocals), Luke (bass) and Levi Klutinoty (drums). The early twenty-somethings started out playing for a youth group back in the day and soon thereafter began scheduling gigs around the Pittsburg area. By the time they were ready to graduate from high school, they decided to put their plans on the back-burner and explore what God had for them along the West Coast.

And it’s a good thing they did.

While they managed to snag a tour, it cost them dearly: Life on the road was spent sleeping on dirt or concrete floors and essentially playing for anyone willing to feed them.[1] But their hard work, dedication and willingness to follow God wherever He led them paid off. After opening for DecembeRadio, they were put in touch with Ian Eskelin of WORD Entertainment.[2] The rest is, as they say, history.

For several months, the brothers worked in both Nashville and Los Angeles (with producers Eskelin, of Nashville, and Howard Benson, of Los Angeles) to record their debut self-titled album which released last month.

“We are making music because [of] our relationship with Jesus Christ,” Adam says in the video below.  “That’s what we care about. That’s what we want to get out, tell people. And that’s why we do what we do.”

With rock-star flair, the group is purposeful and passionate about sharing their hardships, doubts and struggles, which relates well with listeners. “The thing that sets us apart is that if we’re gonna write a song that takes you to a dark place, we wanna bring you to the Light before it ends.”

The band’s lead single, “Satisfied” is currently a Billboard Top 25 Christian AC/CHR hit, and their success is climbing—this week they even received a Dove nomination for New Artist of the Year.

“There are no filler tracks and this is the most solid debut I’ve heard since Over and Underneath by Tenth Avenue North,” reported NewReleaseTuesday.com. “If you want to experience an uplifting, soul-stirring and worshipful album, look no further than About A Mile…” comparing the band’s sound to that of The Fray, Tenth Avenue North, Lifehouse and the Rhett Walker Band.[3]

So there you have it. If you haven’t checked out About A Mile, it’s high time you did. Get a taste of their sound below and tell us: are you a fan?

is a freelance writer and contract copywriter who lives in the seacoast region of New Hampshire with her husband, Eric-Thomas,of five years. She currently serves alongside her mother as the Marketing Director for God’s Girls Christian Store and More, a online retail store serving the southern New England region. Her work has been featured in several print and online publications, and she is the recipient of two Faithwriters’ Editors Choice Awards for her short stories, which are scheduled for publication in the Mixed Blessings series. Her first book, Fragile: 30 Days of Hope for the Anxious Heart, is now available at samanthaarroyo.com. She can be reached at [email protected].
Previous Spice Up Your Life With Cinnamon
Next The Opinions of Others: Should it Matter?