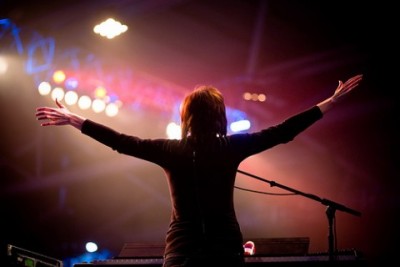 The International House of Prayer worship leader’s earthy, eclectic sound has made her a hit with fans, and Twitter followers were buzzing this morning with the release of her latest record, which detours from her previous album releases.

In an interview earlier this year, Edwards said, “Not only have a lot of my past albums been centered around corporate worship songs, but the last record was recorded in the corporate live setting. I never want to walk away from that, but worship and creativity under God is bigger than just corporate expression exclusively, and in my heart, I’ve always had a singer/songwriter side. This project focuses more on lyrics than choruses and is not as repetitive as I may have been in the past, which has been a really fun process for me as a writer.”

She hopes her latest album will encourage other worship leaders to begin to think outside the box and embrace their creative expression. “A lot of worship leaders feel limited and frustrated creatively,” she said while preparing for the album’s release, “but we’re called to so much more as Christians, even when it comes to our typical definition of worship. I also wanted to channel the kind of music I personally listen to, so it’s also a case of being authentic to what I like. I strongly believe there’s a whole group of listeners who won’t gravitate towards worship music because they have a taste for a different kind of creativity, and it was in my heart to reach those people.”

A self-professed “philosophical heart,” Edwards deep, reflective musings are echoed in her lyrics—for the first time in her extensive ministry. According to the International House of Prayer, Little Bird captures a different side of the songwriter, and for the first time, “exposes several shades of her personal soul.”

“I’m tying together the transcendent and the earthy—the mystery and holiness of who God is, but also the brokenness of our lives and how those two worlds come together,” Edwards said. “Mercy is a huge theme expressed through some of these songs and mercy is part of His glory and His majesty—the fact that He’s so merciful, kind, and generous to those who are sincere. The majority of these songs are experiential rather than observations, and I’m mostly writing from where I am, which makes it a very personal album.”

An “accidental artist,” Edwards began her music career at 19, when she joined the International House of Prayer in Kansas City, MO, as an intern in 1999. Her cancer diagnosis that came soon thereafter opened her eyes and awakened her heart to God’s unrelenting desire and passion for her soul. It was then that the small, earthly things began to appear smaller and less significant and she became more fascinated with the greater, more eternal things. Those sentiments and her continued allure regarding eschatological themes and the frailty of life are echoed throughout her songwriting—particularly in Little Bird.

“I pray that the songs I write would bring people not only into an intellectual understanding, but a true heart connect with God,” she said, “who is bending over the balcony of heaven listening to them singing words that move Him and impact Him.”

Little Bird is now available for digital download as well as through online and retail stores.

is a freelance writer and contract copywriter who lives in the seacoast region of New Hampshire with her husband, Eric-Thomas,of five years. She currently serves alongside her mother as the Marketing Director for God’s Girls Christian Store and More, a online retail store serving the southern New England region. Her work has been featured in several print and online publications, and she is the recipient of two Faithwriters’ Editors Choice Awards for her short stories, which are scheduled for publication in the Mixed Blessings series. Her first book, Fragile: 30 Days of Hope for the Anxious Heart, is now available at samanthaarroyo.com. She can be reached at [email protected].
Previous Peace: An Unlikely Spiritual Weapon
Next Biography Of The World’s Greatest Man