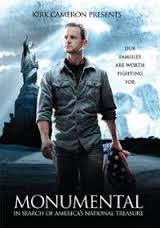 Kirk Cameron presents “Monumental–In Search of America’s National Treasure.” This is the best Historical documentary I have ever seen. It is powerful and well-executed, educational, inspiring and very interesting. This film glorifies God.

Kirk Cameron goes on a journey to England and Holland; and he follows the History of the Pilgrims, Puritans, Separatists, our Forefathers; and then talks about the Founding Fathers—George Washington, John Adams, Thomas Jefferson, etc. He finds a lot of interesting people who tell the truth about our Christianity-based government and education, church and state working as one. It is amazing what documentations were found, showing that Bibles were printed by Congress in 1647, etc. Church and State were never meant to be separated. The motto used to be “Christ and Church and Truth”, now the motto is just “Truth.” What happened to Christ and Church? The schools of this era are not learning the real facts of History. One of the College books they have to read is called “The Godless Constitution,” saying that the founding fathers and Congress were mostly made up of antagonists and atheists. That is a downright lie. About 29 out of the 57 men held seminary degrees back then.  It is written by false teachers—two Yale Professors made a pure deliberate attempt to mislead our children of today. In the book it says that they dispensed with the footnotes, and that they didn’t need documentation for their book “The Godless Constitution.” Having no notes to prove authenticity shows you right there that they were lying. Our Founding Fathers were following the Pilgrim’s faith from the beginning. The Government today totally changed everything that America was ever based on. This documentary is excellent.

This film goes into depth of the Pilgrim’s life, the Puritan Movement, about the Separatists who took two ships, the “Speed Well” and the “Mayflower”. Pastor John Robinson was their group leader and had to stay back and only half of the people got to go to the New World because only the Mayflower made it to The New World around 1609. It took 66 days for 102 of the people to cross the Atlantic. A lot of them died because of sickness. The details are so interesting. A lot more interesting than what the schools teach these days. When the Bibles were put into English and given to the common people, they were able to think on their own and they began home churches. They were to be burned at the stake if they were caught and thrown into prisons. Persecution was rampant—sounds like a lot of places today. History sure repeats itself. There were tyrants everywhere watching for them so they could be killed or imprisoned.

We live in God’s reality, God’s world, not Darwin’s imaginary evolution. True education begins at home. We are all responsible for the way the world is today—we have to stop blaming everybody else and start doing something about it now—each and every one of us, we can’t leave it up to someone else. This documentary is a definite eye-opener. It is a must-see! It is well worth the 90 minutes of your time.

Jude 1:18-20 (NLT)—18) that in the last times there would be scoffers whose purpose in life is to enjoy themselves in every evil way imaginable. 19) Now they are here, and they are the ones who are creating divisions among you. They live by natural signs because they do not have God’s Spirit living in them. 20) But you, dear friends, must continue to build your lives on the foundation of your holy faith. And continue to pray as you are directed by the Holy Spirit.

I have always enjoyed writing little things, poems, devotionals, little short stories and bible studies. I love God and want to glorify His name and I love praising Him. I live in upstate New York with my Chihuahua-Snowball. My children are grown and left me with an empty nest. I have lots of time on my hands and love to fill it with God's Word.
Previous Imperfection Versus Value
Next Her Children Call Her Blessed- Part II (Mothers of Preachers)