Breaking News
Home / Faith / God And The Donkey Who Speaks 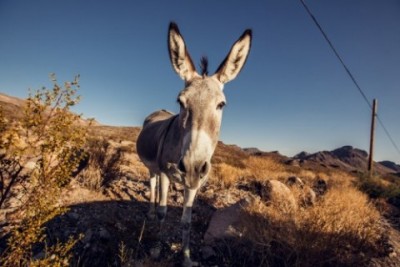 One day, Balak, the king of Moab sent a messenger to Balaam, a well-known sorcerer, to put a curse on the Israelites because the Moabites were afraid of their new neighbors who were on their way to the land of Caanan by their leader, Moses.

Balak was willing to pay a large bribe to Balaam for this curse.  So, Balaam went to ask God what his thoughts were on the matter. God’s response was simple.

“Who are these men with you?”  (Rhetorical question)

“Balak the king of Moab is afraid, shaking in his boots, because of your people the Israelites, and you need to put a curse on them for me ok?  He’s going to pay me a fair amount of money, and that way, I can fight them and drive them away.”

“Do not go with the Moabites.  Sorry.  No curse.  I have blessed the Israelites.”  So God sent Balaam away.

Not surprised at the response, Balaam passed along the message the next morning to Balak who obviously did not like God’s answer, so he suggested to Balaam “Hey, why don’t you come with us?  That’s fine that God said no.  How about I give you a whole bunch of money to come along and try again to put a curse on these powerful people anyways. I want them out of my way.” Balaam responded by simply saying.  “I better go check what God says because I don’t think I can do that for you.  Now, stay here while I go back and find out what else God wants me to do.”

That night, God came to Balaam and said, “Since these people keep insisting, go ahead and go with them, but only do what I tell you.”

The next morning, after saddling up his donkey, Balaam headed out with the Moabites, but God was angry that Balaam had left, so he asked an angel to stand in the road and get in his way. Okay, here is the part that I don’t get.  Why is God getting mad at Balaam for going when he just gave him permission to go?  Keep reading to find out the answer.

Balaam was clueless to what was about to go down because the next moment his donkey steered him off the road and into a field avoiding the angel with the drawn sword.

“What on earth?  Did you just see what happened?” Balaam turned to his servants and asked all the while he beat his donkey.

Again, the angel stood in the road, on the narrow path through the vineyards, with walls on both sides.  The donkey then crushed Balaam’s foot against the wall.

“What are you doing you stupid beast?” Balaam cried out in frustration and pain as he beat the donkey again.

For the last time, the angel moved ahead of Balaam and took his place where the road became narrow and there was no room to turn left or right.  The donkey immediately lay down under Balaam as if taking a quick rest.

“Are you insane!!!  What is wrong with you you lazy idiotic beast?  Why this should do the trick.”  And he proceeded to beat the donkey with his staff.

“What have I done to you to make you beat me these three times?” The donkey called out in frustration.  Without missing a beat, Balaam responds,

“You have made a fool of me.  If only I had a sword in my hand, I would kill you right now.”  The donkey turned and stared at Balaam.

“Am I not the same donkey you have ridden for years?  Do I usually run you off the road, smash you against a wall, or just drop down all fours so you can fall off?”

At that instant, God chose to open Balaam’s eyes and reveal to him the angel standing in the road with his sword drawn.  Now wait a minute!!  Did I just hear this story right?  The donkey talks?  How crazy is that?  And, he sees the Angel and not Balaam?  Believe me, it’s true. Now, here’s the rest of the story.

The moment his eyes were opened, Balaam planted his face on the ground.  God replied,

“Balaam.  Why did you keep beating your donkey when I tried to warn you three different times?  I am here to stop you because you are headed down the wrong way!!  Why is it that the donkey was able to see me three different times and turn away, but you saw nothing but a stubborn crazy beast.  If he had not turned away, I would have killed you, but instead I have chosen to spare you.”

“I have sinned.  I did not know that you didn’t want me to go.  If you don’t like what I am doing, I will turn back around.”

“No, go ahead and go with them, but only do what I am telling you to do.” So Balaam continued on the journey choosing to do the will of God and speak only what God would give him to say. (Numbers 22)

What a crazy story.  A talking donkey?  And a God who said “Yes” but really he meant “No”.  What is this all about?  Think about this, what was Balaam’s intention when he went to God seeking an answer on behalf of Balak?  Did he really care what God had to say to him, or was he only after the money Balak had promised?

Here is where I question the condition of Balaam’s heart especially when he goes back a second time to ask God for an answer that he was already given.  Like a child pestering until they get their way, I believe God treated Balaam in the same manner. God had already given a response to Balaam’s question and instead of saying “Ok Lord, you said nope”, he went back, on behalf of Balaak and a little extra money, until he received the answer he was waiting to hear.

“Fine. Go ahead and go since you won’t leave me alone until I tell you yes.”

Sometimes we have such a strong desire in our heart to do something that when God says “No”, we turn a blind eye to his response and go ahead anyways with our plans, until we end up falling flat on our face and dragging ourselves back to Him asking for forgiveness for not accepting His will for us.  Yet, just like Balaam, He shows us grace and mercy when we have a ready and willing heart to accept his answer in either way and do His will for us instead.

is an author and editor for The Bottom Line Ministries as well as a member of Faith Writers. Currently she teaches high school language arts. She is a mom to four amazing blessings and enjoys every moment life has to offer. Renee has a fervor and drive to learn, she loves to read and spend time with her family, and is involved with her local church ministries. Humbled by God’s gift of words, she has a passion to write what the Holy Spirit has placed in her heart. She hopes to publish her in-progress book someday, but in the meantime, is honored to be placed as part of the TBL writing family and is holding on to the ride wherever God is leading. Renee and her family reside in their country home in Holland, Iowa.
Previous Missing Boy
Next “Shining Hope” Gospel Band