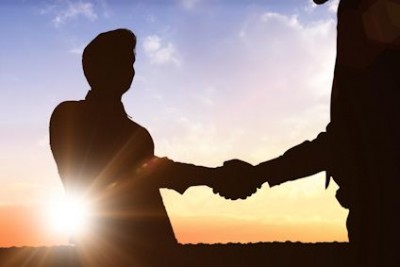 The following is a true story I interviewed my friend, Lori.

The story begins with 68-year-old John Harrison. His heart beat had stopped for 20 minutes. The nurses thought about giving up, right before the monitor showed that his heart started to pump again.

After John woke up, he told his niece, Lori, when she called.

“Lori, There is God.” John told Lori on the phone.

“Ya. Uncle John, I have been trying to tell you for 20 years.” Lori simply replied because she is a Christian and was not surprised at all to hear John’s statement.

“No, you don’t know. I actually met Him.” John exclaimed.

“What?!” Lori cried out in amazement.

John’s statement had Lori’s attention now. Then uncle John continued to tell her that during the time of death, he was in a place that pitch black. It was so dark that he could not see anything, including his own fingers.

Even though John had always thought he was a tough guy, the experience of going to hell terrified him. In the midst of darkness, John felt so alone by himself and was scared to death by the surrounding darkness.

“I was completely alone. I have never been so scared in my whole life.” John said in a trembling voice.

At that moment, he saw Jesus, whose bright light shone into the darkness.

“I have never felt such love from anyone on this earth as I felt it from Jesus. Jesus is full of love and compassion and so kind. Jesus’ love encompassed my whole being.” John slowly but firmly told Lori.

John continued to tell Lori that Jesus told him, “I am not finished with you. I am sending you back.”

That’s the moment his dead heart began to pump again.

So, John asked the nurse to call the priest to come to the hospital so that he could make a profession of faith.

Lori prayed for uncle John for years. She said that John’s mom, Allie, was a tough Christian and prayed for ex-atheist John all her life and her other children as well.

Lori’s mom Mary noticed that John was totally transformed by God after he received Jesus as his Savior. 3 months later, John passed away.

On the day Lori’s mom called her about uncle John passing, Lori was driving and heard the radio playing the hymn “Amazing grace”. The singer sang “The chains are gone. I am set free.”

The next day, Lori told the whole story about John to her daycare coworker, Claudette from Africa.

“I don’t understand. How can God use him when he had cancer and a bad condition of heart?” Lori said.

“You may never know.” Claudette said.

Later on, when Lori was sharing the miraculous story about John with her daycare coworker, Michelle, the radio began playing “Amazing grace”. Again, Lori heard the same lyrics “The chains are gone. I am set free.” At that moment, Michelle heard that song Lori just mentioned and dropped all her books to the floor out of amazement.

“My parents are professors and they have never brought up any topic like this at home. I have never heard about the gospel of Jesus. I don’t want to go where your uncle went, how do I not go there?” Elizabeth cried out.

Right there, Lori shared the gospel with Elizabeth.

After Lori led Elizabeth to pray to receive Jesus Christ as her Savior, Lori hugged her and said, “Welcome to the family!”

This was 10 years ago. Elizabeth met Lori recently and told Lori that she has been bringing her two kids to the church since that day she received Jesus Christ to her heart.

Later on however, Lori wondered if uncle John was truly converted. So Lori, who often talks to God about everything, prayed:

“Father God, if uncle John is in heaven with you now, could you give me a sign, like showing me a butterfly?” Lori was prompted to say this prayer. However, she felt it was an impossible request as this was January in Minnesota.

That day, Lori went to work without seeing one butterfly; she then came home and still didn’t see a butterfly in the cold weather.

After coming home, she sat down and turned on her computer to login to her email account. The first time her password didn’t get in so she typed the second time. Suddenly, she saw the MSN icon, a butterfly, as it blinked twice. Lori slowly realized that this was a sign from God. Once she entered her password correctly and successfully logged in, the butterfly was gone. Lori covered her face in shock and cried out, “Oh, my”. Her husband Jeff rushed to ask what happened. Lori was assured that her uncle John is in heaven with Jesus now.

Lori finally realized that the purpose that God sent John back was to tell His story so that people know hell is real just as Jesus Christ is real. And they won’t go to hell if they believe in Jesus Christ.

John’s earthly life is like a seed dead and buried in the good soil of people’s hearts. And may John’s story be used by God to touch many lives to bear eternal fruits in the spiritual realm.

Manling was born and grew up in Taiwan. She came with her husband and 2-year-old son to New York, NY, at age 30 to fulfill her dream of studying in the graduate school. She received a black belt in Taekwendo at age 40 and has been applying the Bible truth and discipline learned in the martial art to fight in her faith as a spiritual warrior. She works with God to write and is currently a freelance reporter for a national Chinese newspaper and writer based in Minnesota. Much of her writing is in the areas of spiritual learning, Bible study, parenting, education, Sunday school, opinions, interviews, and people's stories, etc.
Previous When History Really Counts
Next Walking the Dog, And God’s Grace

But now, O Jacob, listen to the Lord who created you. O Israel, the one ...