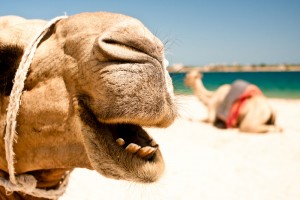 Those Pharisees! Their lives have been described as resembling a gravestone, clean and polished on the outside, while inside they contain ruin and destruction. The Pharisees had more than one problem. Not only did they demand of others what they were unwilling to do themselves, but they went further by avoiding little sins but, “swallowing camels”–choosing to transgress the weightier matters of God’s Law. “You blind guides! You strain out a gnat but swallow a camel.” Matthew 23:24

The bite of a gnat causes swelling and itching at the site, but little else for most of us. Nothing a little anti-itch medicine doesn’t cure! The camel can pose a much larger problem and has been known to  bite and stomp people when under duress, even trampling people to death. But how does the gnat look in comparison to the camel when it comes to sin?  The gnat is tiny but should not be ignored: a quick temper instead of a listening ear, trouble handling emotions under stress, even doubt. All of these can be a gnat.

The camel can fill a room: addictions, abuse, moral lapses, living lies, hate–just to name a few.  And while all sin means guilt and carries the consequence of separation from God if we do not repent and turn to the right way, the camel carries heavier consequences and  heartache than the pesky gnat.

Matthew Henry’s Concise Commentary points out that the Pharisees set up their own standard of law-keeping; “strict and precise in smaller matters of the law, but careless and loose in weightier matters.” It reminds us that, “we are really, what we are inwardly.”

While knowing that God will forgive all sin and restore us to Him regardless of the size of our sin, how can we safeguard against being careless and loose in the weightier matters of God’s Law?

My husband Dan and I have three children and three grandchildren. We live in central Illinois. I am a graduate of The Institute of Children's Literature, a member of faithwriters.com, and a member of SCBWI. My writings have been published at chirstiandevotions.us, in DevotionMagazine, the PrairieWind Newsletter, and here at thebottomline.co.
Previous Sheep Gone Astray: America’s Moral Decline
Next 2 Ways to Bring Families Together