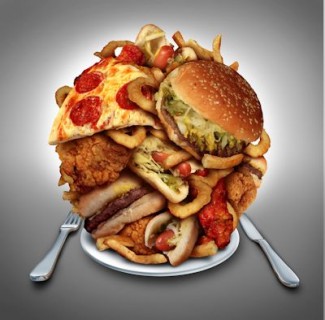 There is a Jamaican proverb which says, “Betta belly buss dan good food waste.” The translation means, it is better to overeat than to waste great food. This is a concept that not only Jamaicans embrace, but most ethnic groups as well. While the reasons behind gluttony may be different, the outcomes are the same. Many eat more than what is needed by the body because they don’t want to waste the food or because what is being served is their ultimate favorites. For others it may have been the norm in the household, and for some mindless eating is the cause.

As the Jamaican proverb implies, many will overeat to avoid excess food going into the garbage. The remaining food on a plate after a meal normally gets thrown away. Refrigerating a half-eaten chicken leg and two fork full of rice is not practical, so rather than throwing it out, most would rather consume it all—even though their stomach has already send a message to the brain that its full. Then there are individuals who don’t eat leftovers or reheated food. As a result, they may choose to eat as much of the fresh batch as possible in order to minimize the amount that gets thrown away. But there are two easy way to solve this problem. Cook less or share more. Invite a friend over for dinner or prepare a plate for a neighbor.

Foods that awakens our taste buds and send them joyously dancing are the ones that are no good for us. Not many people will pile their plates high with Brussels sprouts or broccoli, and not very many will return for a second helping of salad or sugar free cookies. On the other hand, when the menu is loaded with favorites such mac-and-cheese, fried chicken, fries, burgers, bacon, cakes and cookies, then that’s when the mouth extends an open invitation to the menu’s occupants! The solution—even though it’s your favorite, take one serving, walk away, and learn to savor each bite.

Growing up in homes where eating huge portion is a norm that’s celebrated can have negative effects on adults. Most children will take the bad habit of gluttony over into adulthood. If mommy and daddy give a smile and a nod of approval each time a large plate of food is devoured, then that child may grow up with the idea that eating a lot is expected. Parents can fix this by practicing portion control in the homes, and by teaching children that it’s OK to stop eating when they’re full.

Overeating creeps in during those moments of mindless munching as well. This could be while watching television, being on the computer, conversing, or reading. If the brain is already preoccupied with the current task, then it’s easy to miss the signal of a full stomach. Also, grabbing a bag of chips here, and a chocolate bar there really adds up. Such eating only packs on unwanted empty calories. Offset mindless eating by dishing out one serving instead of eating from the bag, track food eaten during the day, and set aside a time for eating only.

Food is good and God agrees. That’s why he has blessed us with nature’s goodies. However, overeating destroys the temple God so meticulously created. So let’s be conscious of the amount of food we eat. Proverbs 25:16 warns “Do you like honey? Don’t eat too much, or it will make you sick!”

Tune in Tuesday to review some of the side effects associated with overeating.

Amelia Brown is from the beautiful island of Jamaica. She is a 28 year old Guidance Counselor by profession, but a passionate writer at heart. Most of her articles written are aimed at stimulating positive change under the guidance of the Holy Spirit. She is also a published poet and a member of Faithwriters. Outside of writing, she enjoys volunteering, cooking, and turning frowns right side up. Amelia currently lives in New York.
@ameliambrown
Previous Rallying Cry
Next Why This Christian Loves The “Redskins” Name