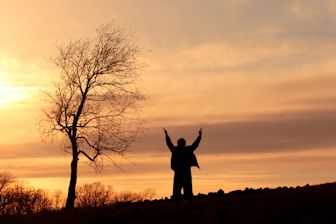 For Fabian Cervantes life used to be selling drugs and evading the law. He spent time in federal prison. His niece was the victim of a drive-by shooting at a Taco Bell Restaurant. Fabian says it is time for “a revival of change” within the gang community and he is setting an example for that change.

While in prison he was invited to attend a ministry being headed up by several inmates who had become Christians. He also started asking questions about what he was doing with his life, and realized he needed to change his ways. The gospel of spiritual salvation was presented to him and he accepted Jesus Christ. In 2005 he was released from prison a changed man. Fabian had told his wife while he was in prison that he had made a decision to follow Jesus. His wife saw the change in him after coming back home and she also received the Lord into her heart.

Fabian now has a successful painting business in Yakima, Washington, the local community in which I live. He also has a jail ministry called “Platando Semillas para Vida,” which means “Planting Seeds for Life.” Combined with all of this he is getting a seminary degree in the evening through a church and speaks in the Hispanic chapel service at the area rescue mission.

At the Yakima County jail Fabian is teaching gang members not only life skills but also anger management, and he is sharing with them the plan of salvation in Jesus. He takes time out from his painting business to hold a class two hours a week. There have been some decisions for Christ. His “revival for change” is working through the power and grace of God. Fabian says that besides spiritual rebirth, the gang community and drug culture must see an individual change from the heart and a return to family values.

Fabian Cervantes has experienced a change in his heart and life and now is helping others to experience that change. II Corinthians 5:17 applies to him and to those he is helping. “Therefore, if any man is in Christ, he is a new creature; the old things passed away; behold new things have come.” Fabian’s life and ministry is an inspiration and example to individuals and gang communities all across the nation, that cultural change is possible through a spiritual rebirth.

John Livingston Clark is 67 years of age and lives in central Washington State. He has written two published books, and two published poems. His initial book is called, " God's Healing Hope: Breaking the Strongholds of Wrong Thinking." His second book, released in December of 2016, is a motivational book written to seniors titled, " Seniors: Are You Retiring or Recharging?" Both books are available on amazon. You can also view his writings on www.faithwriters.com. John is available to speak on a variety of topics. Visit me at jclarkministries.com
Previous Liberation
Next Elijah: Listening to God No Matter What