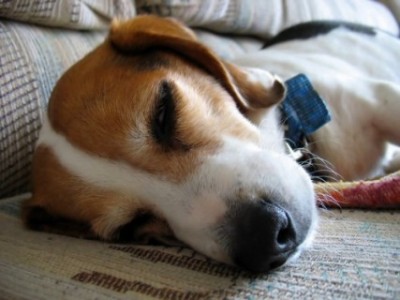 Sassy, a seven year old beagle ran away from her Kentucky home while her owner was on vacation. Cindy Romans the original owner of Sassy said she would always return home after running away. This time she did not return home. She had been gone from her owner for 17 months. One day out of the blue Cindy received a phone call from her ex-husband saying the dog had been found 400 miles away in Brentwood, Pa.

Apparently Sassy had been put in a kill shelter but was picked up by, Forever Home Beagle Rescue, Inc., and taken in by foster parents April Smith and Hope Wilson. Sassy was leading a double life as “Jenny. “The foster parents had a suspicion that the beagle had a micro chip. Sure enough when taken to the vet for a cough the dog was x-rayed and a microchip was found revealing the beagle’s true identity.

Cindy was ecstatic to find out her beloved pooch was found after being gone for over a year. She posted the upcoming happy reunion on Facebook. The dog and the owner will be re united this Friday March 28, 2014. Romans had raised the seven year old beagle since she was a puppy after she had taken the dog when she was only a couple of days old. The foster parents will be taking the dog to her original owner in Kentucky. Cindy Romans became emotional as she talked about having her dog returned to her after being separated for a long time.

This is so refreshing to know about this beloved pet being returned to her rightful owner after being “MIA” for 17 months.  Fortunately the dog was saved from the “kill” shelter and will now live a happy and long life with her  lost owner.

Greg is a born again believer who testifies to the absolute transforming power of God's word. Greg has been called to full time ministry and He has known Jesus for most of his life. Greg received his degree in Pastoral Ministries from what was formerly Bethany University in Santa Cruz,California. View Greg blogs on iwriteforjesus.com. Greg has a book published on " To Jesus Christ the High Priest of my confession: A personal Testimony." find it on http://www.amazon.com/Christ-Priest-Confession-Personal-Testimony/dp/1507706847/ His testimony in short form is published in "Trials and Triumphs II" on http://www.amazon.com/Trials-Triumphs-II-FaithWriters/dp/1498416012/. This book is filled with 50 inspirational testimonies and is a project of Faith Writers.
Previous Freedom from Fear
Next Wrangling for God’s Wisdom