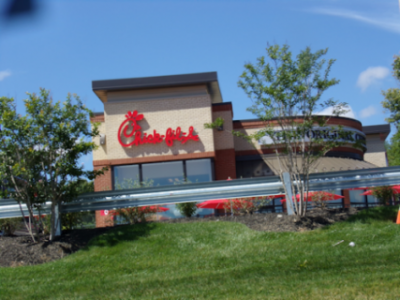 Someone Is Always Watching

Have you heard the little song with the line that goes, “…for the father up above is looking down in love…”?  Well, not only is God watching, but others are watching, too.  There are times when people notice the Christian’s not-so-glorious actions; but, there are those times when our Holy-Spirit-inspired deeds brilliantly shine forth giving God all the glory due His name.  In this particular article,  you will read how the manager at a Chick-fil-A restaurant in Birmingham, Alabama, made God look really, really good…and people were watching. (Matthew 5:16)

The owner, Mark Meadows, was mingling with the customers when a very disheveled man entered his store.  The man, who appeared to be homeless, asked Mark if there was any work he could do to pay for some food.  Mark offered the food free of charge and also noticed the man’s hands looking cold, cracked, and dried.  Caught unprepared, Mark simply offered his own gloves to the needy man.  These acts of kindness, witnessed by a mother with her young son, reduced the woman to tears.  She saw a teachable moment and didn’t hesitate to draw her son’s attention to the importance of an act of kindness and generosity.  Mr. Meadows obviously knew the admonition of the Bible in Hebrews 13:2, “Do not neglect to show hospitality to strangers, for by this some have entertained angels without knowing it.”.  He had never seen the man before nor has he seen him since.

Living by that directive from our Heavenly Father inspired Mark to go all out a few months prior to helping the homeless man.  The weather had been particularly bad and Birmingham had received enough ice and snow that it stranded motorists on the highway near this same Chick-fil-A.  Since this unnatural snow and ice paralyzed anyone wanting to drive, the workers at the restaurant were resolved to stay put.  Mark decided to meet the need that God had placed before him.  He instructed his team members to cook hundreds of chicken sandwiches; then they carried them to very thankful motorists handing out the food free of charge.  Not only did they offer free food, but they offered, to those who would accept, the warmth of their dining room for the night.  In the morning, they fired up the ovens and baked some warm biscuits for those who stayed the night – also offered free of charge.  I assure you, people noticed!

God saw the good deeds that brought Him glory in these two instances.  God saw and others saw.  Nothing escapes the watchful eye of God who never sleeps or gets too busy to pay attention.  He daily gives people opportunities to glorify Him with our deeds.  You don’t have to be rich or famous – just trusting and willing to give God the glory!  Someone is always watching.

Have you ever acted upon an inspiration to do a kind deed that might bump you out of your comfort zone?  What will you do with your next opportunity to bravely bring glory to God?

I just love walking outdoors - day or night. I identify most with the creative side of God and am energized by His artistry all around this world. He amazes me every time I turn around! Yeah, God and thank you, Jesus.
Previous The Helper Will Come
Next The Truth about Abortion