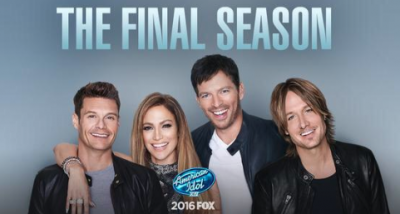 The hit TV show, American Idol, announced yesterday that after 13 years on the air, it’s calling it quits. The news was tweeted Monday:

The fifteenth season will be the show’s last, after consecutive years of declining viewership. The network announced in a press release that the “season-long celebratory event, American Idol XV will feature host Ryan Seacrest and judges Jennifer Lopez, Keith Urban and Harry Connick, Jr., as they search for the final Idol superstar and pay tribute to the past 14 seasons of amazingly talented contestants and the millions of fans who tweeted, texted and championed their Idols.”[1]

Fox CEO and Chairman Gary Newman admitted the decision didn’t come easily, but he did say that the final season will, “be a true season-long celebration. We’re already talking about surprises we can have for the fans to make it feel special and to send it off in a way that is as significant as the run it’s had on our network.”[2]

Over the years, American Idol has seen many Christian artists walk on stage, including this season’s finalist, Clark Benson, and Idol alums Carrie Underwood, Lauren Daigle, Mandisa, and Colton Dickson  (just to name a few).

Carrie Underwood got started in 2005 on the fourth season of American Idol. The Oklahoma college student went on to be named “the female vocalist of her generation . . . of any genre” by Rolling Stone. Since her debut, she’s sold 65 million records worldwide, released 20 number-one hit singles, and earned nearly 100 major accolades, including seven GRAMMY® Awards.[3] Among those hit singles include “Jesus Take the Wheel,” “Something in the Water,” and her viral rendition of “How Great Thou Art” which has seen over 32 million hits on YouTube at the time of this writing.

Lauren Daigle was a contestant on both the 2010 and 2012 seasons of American Idol, and recently released her debut album, which includes hit single, “How Can It Be?” According to K-Love.com, Lauren’s deepest desire is to write and sing music that is pleasing and honoring to her Savior. “If I can help people, even if it’s with a three-minute song, just experience God, you never know how that will change the rest of their day or the rest of their life,” she said.  “I just want people to be able to experience Him.”[4]

Mandisa has seen a rise to fame thanks to American Idol. She starred on season five of American Idol and finished in ninth place. Probably the most talked-about moment on the show was when Mandisa stood up to Simon Cowell who had made comments about her weight when she first auditioned. “ What I want to say to you is that, yes, you hurt me and I cried and it was painful,it really was,” she said. “But I want you to know that I’ve forgiven you and that you don’t need someone to apologize in order to forgive somebody. I figure that if Jesus could die so that all of my wrongs could be forgiven, I can certainly extend that same grace to you.” Simon immediately apologized.[5] Since then, she’s become a well-known artist in Gospel and Contemporary Christian genres. Just last year, she even won a GRAMMY Award for her album Overcomer.[6]

Colton Dixon is one of the more recent American Idol success stories, having placed seventh on season 11. His second—and latest—album Anchor released last year and Colton shared: “My hope is that at the end of it all, you feel closer to God than you did when you pressed play.”[7] Colton has been singing since he was young and always seen his voice as a gift from God. “ ‘A servant isn’t greater than his master, nor is a messenger greater than the One who sent him.’ John 13:16. I try to live by this every day,” he says. “I believe that I am just one of the messengers that God has called to this world.”[8]

With so many great names in Christian music having earned the spotlight as a result of American Idol, it’s disappointing to see the show go off the air. It will be interesting, too, to see how these artists respond to the news in the coming days.

So what do you think? Are you sad to see American Idol go? Or are you indifferent? And of the Christian artists that debuted on the show, which are your favorites?

is a freelance writer and contract copywriter who lives in the seacoast region of New Hampshire with her husband, Eric-Thomas,of five years. She currently serves alongside her mother as the Marketing Director for God’s Girls Christian Store and More, a online retail store serving the southern New England region. Her work has been featured in several print and online publications, and she is the recipient of two Faithwriters’ Editors Choice Awards for her short stories, which are scheduled for publication in the Mixed Blessings series. Her first book, Fragile: 30 Days of Hope for the Anxious Heart, is now available at samanthaarroyo.com. She can be reached at [email protected].
Previous The Gift of Discerning Spirits
Next Pastor Saeed Spends 35th Birthday in Prison: Please Pray for Our Persecuted Christians