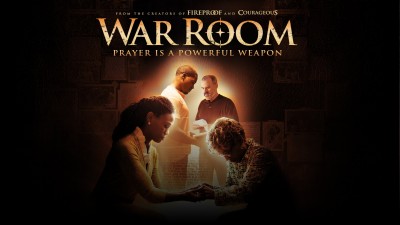 While many of us spent Labor Day weekend soaking up the last days of summer poolside, others were taking in the year’s final installment of summer blockbusters. The winner? The faith-based drama, “War Room.”

This is the film’s second weekend in release and, according to Rentrak estimatse, climbed its way to first place, earning $12.6 million over the long weekend—$27.9 million to date. [1] The latest religious film knocked “Straight Outta Comptom” from the top slot, which it’s held for three straight weeks, and even surpassed “A Walk in the Woods,” which earned $8.2 million during its opening weekend.[2]

In an interview on Fox News Monday morning, lead actor T.C. Stallings (who plays Tony Jordan) says he isn’t surprised by the success.

The latest film from the Kendrick Brothers is on track for surpassing their previous releases[4] (“Courageous” and “Fireproof,” among others).

“It’s one thing to go to the movies and see eye candy… but we want to leave them with something more eternal,” co-director Alex Kendrick told Charisma News.[5]

The eternal message: the value of an active prayer life.

1 Thessalonians 5:17 (ESV) reminds us to “pray without ceasing.” And we cannot overlook the power in James 5:16 (ESV), which says, “The prayer of a righteous person has great power as it is working” (emphasis mine).

Not only does the movie continue to rake in box-office success, but it is impacting lives all over the nation. Comments, like the ones below, flooded the film’s Facebook page:

“My husband filed for divorce a few months ago but I still pray for us, him and our kids daily. I will now pray very differently after seeing this! God is good and I love that this movie is doing so well. The showing I went to today was a full house. Thank you!”

“I never had a movie to move my spirit and change my heart the way War Room did. I walked out of that theatre a change woman.”

“My husband and I have started getting up early to spend time in prayer since we saw this movie! We believe, no, we KNOW, prayer will and can change the trajectory of our life!”

“Took 3 of my grandchildren with me and my 11 year old granddaughter went home and asked to make a war room. For now She has post its on her bedroom walls with prayers. Praising God for your obedience and faithfulness in following where He leads you.”

Seems “War Room” is hitting the mark and accomplishing exactly what the producers set out to do. Have you seen the movie? How has it impacted your prayer life?

is a freelance writer and contract copywriter who lives in the seacoast region of New Hampshire with her husband, Eric-Thomas,of five years. She currently serves alongside her mother as the Marketing Director for God’s Girls Christian Store and More, a online retail store serving the southern New England region. Her work has been featured in several print and online publications, and she is the recipient of two Faithwriters’ Editors Choice Awards for her short stories, which are scheduled for publication in the Mixed Blessings series. Her first book, Fragile: 30 Days of Hope for the Anxious Heart, is now available at samanthaarroyo.com. She can be reached at [email protected].
Previous Praying for your Enemies
Next Living Your Life on Purpose