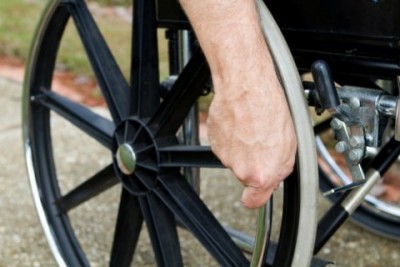 Any moment life can take an unexpected turn as was for Dustin Shillcox of Green River, Wyoming who was driving home after a delivery for his father’s glass company when his van tire blew throwing him from the vehicle at a high speed. “The accident broke his back and injured his spinal cord, causing complete paralysis and sensory loss below his injury.” (ABC News).  Almost a year was spent in intensive recovery to try and reshape his new life.

However, recently Shillcox discovered an advertisement for the Christopher and Dana Reeve Foundation that was needing candidates to participate in a clinical trial in regards to using an electrode stimulator implant for patients with paralysis.  Shillcox was not the only participate in the study.

Shillcox stated ‘“I knew I wanted to do anything possible to regain mobility back,”… He applied for the clinical trial and was accepted.’” (ABC News)

Dustin Shillcox’s story of a deep desire to be healed reminds me of the paralyzed man whose friends were so desperate to have their friend healed that they made a hole inside the roof of the house where Jesus was speaking, and lowered him down to Jesus-expecting him to be healed. (Mark 2:2-12, Luke 5:17-26)

Both stories are in reference to miraculous healings and that is exactly what has happened here.  God has used these doctors, scientists, and researchers to use their given talents while all the while He has provided a miracle to those who never thought moving their limbs was possible to do again.

is an author and editor for The Bottom Line Ministries as well as a member of Faith Writers. Currently she teaches high school language arts. She is a mom to four amazing blessings and enjoys every moment life has to offer. Renee has a fervor and drive to learn, she loves to read and spend time with her family, and is involved with her local church ministries. Humbled by God’s gift of words, she has a passion to write what the Holy Spirit has placed in her heart. She hopes to publish her in-progress book someday, but in the meantime, is honored to be placed as part of the TBL writing family and is holding on to the ride wherever God is leading. Renee and her family reside in their country home in Holland, Iowa.
Previous God wants you in Eternity
Next Childlike Faith