Breaking News
Home / Family / Can you be “A Good Samaritan” Anymore? 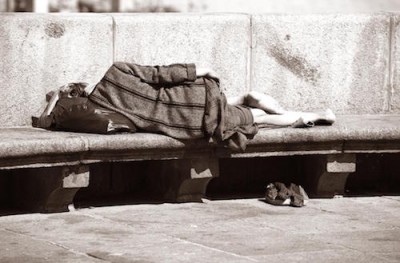 Can you be “A Good Samaritan” Anymore?

My sister calls me the “Photo Nazi”.   Embarrassingly, a title I have rightly earned. More than a few times my fit has been the source of our family’s entertainment as I try to capture my girls’ childhood from behind my camera’s lens. I love to set up, take pictures just to get the perfect shot. The other day was no exception.  It was an absolutely gorgeous afternoon and I convinced (a.k.a drug kicking and screaming) my precious girls for a fall photo shoot.

After about an hour, we had all had enough.  We walked and climbed on nearly every legal  (and a few illegal) photo staging locations. I was satisfied and we were headed to the house. I was ready to go except for one small detail, I had, somehow in all of my gallivanting, lost my youngest child.

I found her in the distance talking to an elderly, homeless man on a park bench.  I overreacted (I tend to do that). With my teeth clinched, I began that power walk that only a mother can do. With a forceful, “Get over here now!” I beckoned. Her innocent eyes she just looked at me, questioning, “Mommy, what did I do wrong?  He is just a sad, old man. He needed a friend.  He told me he went to sleep, and when he woke up someone had stolen his dog.”

Now, I know what you are thinking; my mind went there as well.  Kidnappers, rapist, murders, senility, alcoholism and just plain bum.  I wanted out of there as fast as I could .

But, he was crying. He had lost his dog.

I told the man I was sorry we had to go, but we would look for his puppy. If we found it we would bring it back (you and I both know I didn’t mean a word of that).  Victorious, with both kids in hand, I proudly walked away.

… but after about ten steps I began to cry.

How does the story of the Good Samaritan work in today’s society?  How do you show the love of Jesus in these days?

My oldest child asked me, “ Why doesn’t he just go home?  Doesn’t he know you should not sleep on a park bench?”  Her eyes were frozen on me as I tried to find the words to explain.   I had to stop and explain homelessness to her little heart. A pitiful attempt in my opinion, but it was all I had.

All the while, my little one was still lagging behind (looking for her friend’s puppy).  Torn is the only word I could come up with to describe my feelings. On one hand, I am responsible for these kids. My role is  to protect them from dangers unaware.  I ensure their safety even over my own. On the other hand, this man needed a friend.

I wonder what my little girls thought about their hypocritical mother. The one who preaches compassion, friendship and empathy. She could see it, but I couldn’t.  My view had been clouded by factors that are not even in her world. She lives in Eden.  Her world is pure, unfortunately her world is not real.

How do you combine compassion and caution in a world where terror is striking all around us?  Where judging correctly a situation is a matter of life and death some days.   I was faced with the reality that I can lay down my life, but do I have the right to lay down theirs?

I walked away wanting to live in her world, to stop and love people just because they needed it.  I know that world existed one day, and one day it will again.

I know I have to live in my lens, I would rather look through hers.

How do you show compassion in the context of this war-torn, evil world?

Previous How Can I Know if God Really Loves Me?
Next The Character of America: What Exactly Is It?