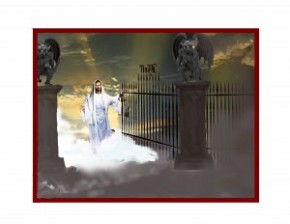 Christ Holds the Keys of Hell and Death

In John 19:30, when Jesus said, “It is finished,” just before he died on the cross, it meant that the Old Covenant was at an end and the New Covenant just beginning. The prophecies of Christ, as “The Son of Man” were now fulfilled and Christ’s days on the earth were at an end, but it didn’t stop there, it was actually the beginning for those who are called Christians.

Hebrews 9:15 declares:
“And for this cause [Christ] is the mediator of the New Testament, that by means of death,  for the redemption of the transgressions that were under the First Testament, they which are called [by God] might receive the promise of eternal inheritance.”

Jews for years had been sacrificing animals to redeem their sins with the blood of the creatures they sacrificed, which served only as a covering for their sins. Because Christ Himself, free of sin, became the sacrificial lamb, sins were washed away completely and the Gates of Heaven opened for the Redeemed. (Hebrews 10:1-13)

One of the requirements of the New Covenant is that all must confess that Jesus Christ is Lord. (Philippians 2:10-11) So logic dictates that Christ had to descend into the pits of Hell to give the prisoners there the chance to confess with their own mouths that He is Lord. 1 Peter 4:6 says, “For for this cause was the gospel preached also to them that are dead, that they might be judged according to men in the flesh, but live according to God in the spirit.”

It is my belief that Christ presented the gospel story to the prisoners that were there, finally giving them a chance to redeem themselves by confessing that He is Lord of All. By accepting His sacrifice they could once again return to God.

Many Theologians do not believe that Christ physically went down to Hell. In view of the Scriptures presented in this article, I would venture to say that He indeed did, for even in John’s description of Christ in the first chapter of Revelation, he states that His feet were, “like unto fine brass, as if they burned in a furnace,” and He also has the keys of Hell and Death. (Revelation 1:18) It seems to me that Christ would have to go into the very bowels of Hell to get those keys.

Christ was the first to be raised from the dead, and the prophecy that the dead in Christ shall rise first began to be fulfilled. From Christ’s resurrection forward, every believing Christian who dies goes to Heaven. In the book of Matthew, the Word speaks of people long dead walking the earth at Christ’s resurrection, “And the graves were opened; and many bodies of the saints which slept arose, And came out of the graves after his resurrection, and went into the holy city, and appeared unto many.” (Matthew 27: 52-53)

So there were actually eyewitnesses that Christ did indeed set the captives free. The captives were those who had died under the Old Covenant, those sitting in Abraham’s bosom, as mentioned in the parable of the rich man and Lazarus (Luke 16:19-31), (which may also be the place Catholics have labeled Pergatory) as well as those in Hell.

Isn’t it wonderful that God has provided a way for us to return to Him at the end of our days? Christ carried the sins of the world down to the fiery pit and left them there when He died for us, and by accepting His sacrifice, sin no longer has a hold on us, unless we allow it to.

So what are you doing to keep the sins of the world at bay?

Tim is a self-published author. His genre is Christian Fantasy- he loves the challenge of trying to combine Christian and Fantasy into a novel that loses none of it's spiritual value. Tim has been an active member in every Church he has attended. He has served as Head Usher, a Sunday School Teacher, and a Youth Director, and has also served as a Church Elder. Tim's prayer is that the Holy Spirit will minister through his words, and that his experiences and knowledge will be helpful to someone out there who needs a true friend like what we have in Christ Jesus.
Previous The 10 Commandments–Instructions for Honorable Living
Next Why We Need the Ministry of Deliverance