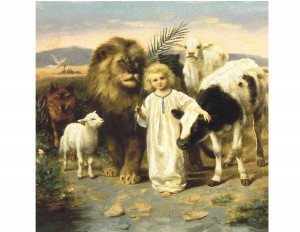 Preparing for the End Times

The child in the picture and that big old lion, with the cows and the lamb came walking toward me, I remember I was quite frightened at first, but they didn’t seem to see me. They just walked straight ahead, and disappeared once they came up to the crib. This picture is from a Bible story book entitled, The Bible in Pictures for Little Eyes, by Kenneth N. Taylor, and is my farthest back memory. I seem to recall that the picture was called “Millennium,” and it was based on a prophecy recorded in Isaiah 11:6.

I do not know why I was seeing this vision, perhaps my mother had just read the story to us kids before we went to bed, but I do remember the book and I was fascinated by the illustrations- wonderful paintings of biblical characters such as Samson and David, Daniel in the lion’s den, and Noah’s ark. The book was published in 1956, and I have been looking for another copy for a long time. I have seen a few in book stores over the years, but the picture quality is poor in the newer editions.

The picture is important because it was my first memory, and it came in a vision. I was only about 3-years-old, and I actually remember standing in my white crib looking through the archway into the living room of this little guest house where we lived behind my mother’s foster parents’ home. I remember that little house even though we only lived there for about 2 1/2 years.

This dream was perhaps the catalyst for my later interest in the end times and the prophetic visions revealed in the Bible. The first Bible I ever read was a small red copy of the New Testament that I received from a vacation Bible school I attended when I was eight-years-old. The first book I read was Revelation. I tried reading the Gospels, but they seemed redundant, and I got bored reading them, and the rest of the books of the New Testament were only lectures to my mind, but Revelation at least had some semblance of a story.

My interpretation of Revelation has always been based on it being written in chronological order, with each chapter following the next. Many biblical scholars disagree with this thought process, but my studies of the end times throughout my life have stuck to my original instincts about it. Here I will begin to share a little bit about my views on Revelation, and will continue in future articles.

The first chapters describe the Apostle John being held prisoner on the island of Patmos. I find a parallel here to something Jesus said about his beloved disciple in the book of John chapter 21:

“Jesus saith unto him [Peter], If I will that he [John] tarry till I come, what [is that] to thee? …Then went this saying abroad among the brethren, that that disciple should not die: yet Jesus said not unto him, He shall not die … “.

“Truly I say to you, there are some of those who are standing here who will not taste death until they see the Son of Man coming in His kingdom.”

So, John did see the entire end times scenario played out on the island of Patmos in a vision he had, recorded in the book of Revelation.

As witnesses for Christ, we must share what we have learned and help lead as many people as possible to the Lord and His coming Kingdom. (2 Peter 3:9)

I have a good Christian friend who believes that as long as people witness to others and help convert them, God will hold back His wrath, until all have heard the Gospel, “And this gospel of the kingdom shall be preached in all the world for a witness unto all nations; and then shall the end come,” (Matthew 24:14).

How are you sharing Christ’s command to “go into all the world and preach the gospel to every
creature … “? (Mark 16:15)

Tim is a self-published author. His genre is Christian Fantasy- he loves the challenge of trying to combine Christian and Fantasy into a novel that loses none of it's spiritual value. Tim has been an active member in every Church he has attended. He has served as Head Usher, a Sunday School Teacher, and a Youth Director, and has also served as a Church Elder. Tim's prayer is that the Holy Spirit will minister through his words, and that his experiences and knowledge will be helpful to someone out there who needs a true friend like what we have in Christ Jesus.
Previous Tired of Trying to Hold it all Together?
Next God Can Speak Through Dreams