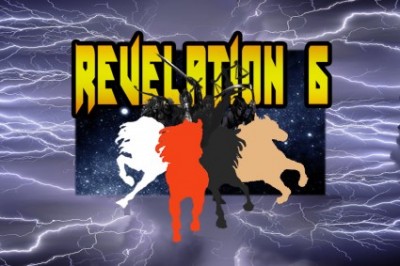 Last week, I talked about Judgment Day and we discussed events surrounding the end times. Today, we continue that conversation.

Once Christ gave John the information He wanted him to relay to the seven churches, (Revelation 3:20-22), Christ took John up to heaven in the spirit, so he could see and learn what fate men on earth would face in the future if they did not correct their ways and accept Jesus Christ as King, (Revelation 4:1-3).

A fantastical world opened up before John’s very eyes. He found himself in a wonderful place, and face-to-face with some rather bizarre creatures. The strange creatures he saw were constantly worshipping and praising God, including a panel of 24 Jewish elders who encircled the throne of God. (Revelation 4:4-8)

He who sat on the throne held a small book in his hand sealed with seven seals, which no creature in heaven or earth could open. John’s curiosity had been piqued, so he was noticeably distraught. One of the elders told him not to fret over it, and said that Jesus could open the book. (Revelation 5:9)

Many believe that the four horsemen described in chapter 6 of Revelation are part of the Great Tribulation, but if that’s the case, then those of us who are saved will not avoid the tribulation as Jesus promises in Revelation 3:10. We also should consider that the seven seals will be opened one-by-one and in order, so it’s not an overview of the Great Tribulation, as some would say. In my studies, the four horseman seem to represent the ages of man, from the days of world conquerors, to an “as of yet unfulfilled” period of worldwide famine and pestilence.

Once Christ opened that first seal there was a peal of thunder, and a white horse appeared, “ … he that sat on him had a bow; and a crown was given unto him; and he went forth conquering and to conquer” (Revelation 6:2).

Depictions of many world conquerors show them astride a white horse, such as Napoleon Bonaparte, or Caesar Augustus. White represents purity and singleness of mind, traits a world conqueror might need since they consider themselves better than anyone else. The rider is also depicted as having a bow, with no arrows, meaning that he gains power through deceit, causing people to believe he is a solution to a problem.  A world conqueror cannot gain power without followers, and what better way to gain an army than to have people believe they are part of the solution. He is given a crown as people accept his leadership.

The age of world conquerors has already been fulfilled, and the last of these was Adolph Hitler. As the echo of the hoof beats of the white horse faded into the hills, a new age began. The USSR formed and became a communist country, threatening to take all peace and freedom from the world, and was later joined by China.

“And there went out another horse that was red: and power was given to him that sat thereon to take peace from the earth, and that they should kill one another: and there was given unto him a great sword,” Revelation 6:4.

The flag of the USSR is depicted with a solid red background, and the main color of the Chinese flag is also red, each of them became communist countries of great power. The rider carries a great sword, which is used to divide and separate. From the end of WWII, to the fall of the Russian Communist party, that’s exactly what happened–the world was divided in two, with Democracy and Communism on the forefront of most conflicts.

The hoof beats of the red horse faded into the distance after Russia fell in the 1990s, but no sooner had the red horse begun to gallop off than the hoof beats of a dark horse began to echo into our ears. An age of economic distress started around 2007 or 2008, also known as the Great Recession which we continue to feel the impact of today.

“And when he had opened the third seal, I heard the third beast say, Come and see. And I beheld, and lo a black horse; and he that sat on him had a pair of balances in his hand.” (Revelation 6:5)

Here the age of man took an economic fall and it quickly became a worldwide problem.

“And I looked, and behold a pale horse: and his name that sat on him was Death, and Hell followed with him. And power was given unto them over the fourth part of the earth, to kill with sword, and with hunger, and with death, and with the beasts of the earth.”

This is the final horseman, which we have not experienced yet, but once this economic failure runs its course, so will begin the ride of the Pale Horse, a time of great famine and pestilence–a period when a fourth of the human population will be destroyed.

All these events must be fulfilled before the beginning of the tribulation period. These are the ages of man, three are nearly fulfilled, and the fourth is yet to come. Though the fourth age promises to be a time of great trouble, it does not compare to what’s ahead for the unbelieving, and those who miss the rapture.

Why would Christ allow us to go through such a troublesome time, when His promise is that we won’t ever be forsaken, and that He will never leave us?

There are three distinct views on when the rapture will happen, pretrib, midtrib, and posttrib. Following is a link that gives an overview of each.

What is your view of the end times and the rapture?

Tim is a self-published author. His genre is Christian Fantasy- he loves the challenge of trying to combine Christian and Fantasy into a novel that loses none of it's spiritual value. Tim has been an active member in every Church he has attended. He has served as Head Usher, a Sunday School Teacher, and a Youth Director, and has also served as a Church Elder. Tim's prayer is that the Holy Spirit will minister through his words, and that his experiences and knowledge will be helpful to someone out there who needs a true friend like what we have in Christ Jesus.
Previous The Prayer God Won’t Answer!
Next You Are a Giant!