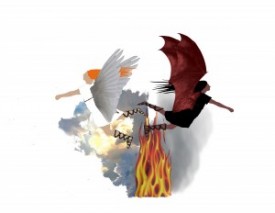 Only 2 Kinds of People

There are only two kinds of people in the world, believers and nonbelievers. Ironically they are both linked to God. One is based on faith, and the confidence that God exists. The other is based on the absence of tangible proof that God exists. The problem is, due to the internet and information overload, if you are not already a believer, it’s hard to decide which one is right.This causes a lot of confusion for many people.

The more science discovers, the more questions pop up concerning God and His existence. Part of the problem is the fact that man is corporeal. There are limits to what he is mentally and emotionally capable of. God’s Power, on the other hand, is eternal. His power has existed forever and will not end. There is no beginning or end with God.

Society, through science, has determined that the universe has a beginning–it has been expanding ever since its conception, so it can be traced back to the very beginnings of its creation. Although the universe has been around for a very long time, it’s not eternal. According to Scripture, God created it in a matter of days, and our feeble minds can only guess how He did it by measuring it by billions of years.

God is forever the same–you can’t improve perfection. Although science is learning how to explain the universe, it cannot explain God, the Creator of it all. As science learns more and more about creation and how things have evolved through the centuries, they try to limit God as well. The thing is, God has always been there, He can be found throughout the universe. God is all around us, indwells us, and envelopes us, you cannot go where God is not. ( Psalm 139:8)

I find it rather interesting that the way men are treated today, runs parallel to the way society treats God. As time passes, God is becoming less significant in our lives, and at the same time, the male role in society has become increasingly less significant. Man’s role in the church is also diminishing. The positions of pastor and deacon, at one time, fell to the man of the house, and the Bible does tell us that the man is the head of the house just as Christ is head of the church. Men are supposed to be the spiritual leaders, (Ephesians 5:23-30).

Man has somehow lost focus, and in order to break this trend, he must learn to again become the spiritual leader God created him to be. As believers, we are not to conform to the world. Just because the world believes that women should be able to do anything a man can do, it doesn’t mean it has to be practiced. Women and men have specific roles in God’s design for the family, and it is up to the believing family to conform to what God says rather than society. (God does know a little more about male/female relationships than society does.)

God created men to be leaders, and in biblical days, the man sat in the public places and exercised his wisdom as an elder of society, today man needs to serve the same purpose. Every believing man should realize that his wife helps hold the family on a steady course. Behind every great man is a woman, and even the jobs in the church described in the Bible state that the man should be the husband of one wife; it’s a prerequisite for a leader to be married. (1 Timothy 3:1-16, Titus 1:6-9)

A mother and a father must work hand in hand to raise a proper family, giving physical support when necessary, emotional support and intellectual support as needed. This can be done in a way prescribed by God from the beginning of time (Matthew 19:4-6). On the contrary, society’s view says there is no difference between male and female; each can do what the other does interchangeably.

Because the woman is the one God designed to carry children from the time of conception to when they are born, only the mother can properly nurture a child. It’s only natural, moms were created for comfort and it’s their emotional support that keeps the comfort of the home in check. Women are more sensitive to the emotional well-being of the family, whereas men are more sensitive to the physical well-being of each individual. It’s the way God designed each of us, and one cannot do without the other. We can try on our own, but we are destined to fail or fall short at some point.

Romans 1:22-27 sums it up pretty well, describing exactly what denying God’s power has done to mankind:

“Claiming to be wise, they became fools, and exchanged the glory of the immortal God for images resembling mortal man and birds and animals and creeping things … “
(verse 22 only)

The natural course of things is quickly going by the wayside, what can each of us do to improve the chances of creating a more promising future for coming generations?

Tim is a self-published author. His genre is Christian Fantasy- he loves the challenge of trying to combine Christian and Fantasy into a novel that loses none of it's spiritual value. Tim has been an active member in every Church he has attended. He has served as Head Usher, a Sunday School Teacher, and a Youth Director, and has also served as a Church Elder. Tim's prayer is that the Holy Spirit will minister through his words, and that his experiences and knowledge will be helpful to someone out there who needs a true friend like what we have in Christ Jesus.
Previous Do You Have the Confidence of Job?
Next Is it Time for Spiritual “Housecleaning”?